Talk about interesting anecdotes!  Remember, no claims are made for Harry Watson’s Precious Waters brand nanosilver.  But this story involves a condition that has never before been associated with nanosilver.

About three years ago, the youth pastor in Harry’s southern California church, Godfrey, finally got to deliver a sermon, and it was so powerful, with emotion and rapid fire delivery, that the church elders were very impressed.  So much so, in fact, that they sent him on a mission to Chicago.

Not too long after that, he became totally paralyzed.  The church told the major hospital in Chicago that they should spare no expense in helping him recover, but after 6 months the doctors there concluded they could do nothing to help him, and sent him home.

The church helped set up volunteers to care for and support Godfrey and his family 24/7.  Harry’s wife Donna was one of many volunteers.  After two years, all of them had given up hope for improvement and simply wanted to provide as much care as possible.  This was understandable, since he couldn’t speak, his eyelids drooped, and he couldn’t look at you or turn his head.  Every Sunday the family or volunteers took him to church in a wheelchair, where everyone felt bad for him because he never seemed to improve even a little bit.

Finally Harry got so concerned that he suggested to the family and to some in the congregation that perhaps some unknown, undiagnosed pathogen had infected Godfrey in Chicago, and it might be worthwhile for him to try using nanosilver, since it certainly wouldn’t harm him, and conceivably it could help if indeed it were such an infection causing the paralysis.

Finally, in mid-August Harry and his wife Donna could witness his suffering passively no longer, and decided to donate all the nanosilver that might be required to stimulate recovery, or at least enough to conclude after a trial period that it wasn’t having any effect.  They persuaded the family to at least try it, since it would cost nothing and would certainly do no harm.

Harry instructed the family to give him one ounce three times a day, the dosage that recently was given to a late-stage cancer patient who recovered using nanosilver and taking chemo.  After a month, though, Harry and Donna concluded it probably wasn’t having any positive effect, since there seemed to be no change in his condition.

That all changed this past Sunday, when someone at the church said to him, “Good morning Godfrey.”  Imagine his surprise and elation when he heard the reply, “Good morning Michael.”  It was clearly spoken and Godfrey’s eyes no longer drooped.  He could actually move them around in different directions.

Now Godfrey was supposed to take baking soda with the nanosilver, but with his paralysis he was having a hard time swallowing the baking soda, and so he was able to take only a little bit of it.  So for the most part the only change is that he started taking nanosilver regularly, with a little baking soda to the extent he could swallow it.

This is not to claim any cause and effect relationship, and this is just an anecdote with absolutely no scientific significance.  But here we have a situation where, in less than two months, someone who had been totally paralyzed for three years starts to speak clearly and move his eyes … just a little over 6 weeks after he started to take nanosilver.  What a wonderful coincidence!

Just imagine, if some cause and effect relationship were to be established in the future, there might be thousands of people with undiagnosed conditions that could benefit.

Harry and Donna are of course elated, and they are eager to see what if anything develops in the coming weeks.  We will keep you apprised of any significant developments if and when they occur. 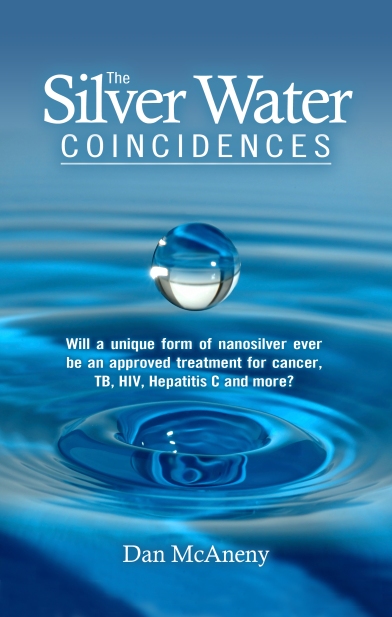